Summary : The work on the first MedECC report started at the end of 2016 and its publication is planned for the end of 2019. It is a joint and voluntary effort of the international scientific community. The entire assessment will be based on published literature and no additional research will be undertaken. Scientific experts will review the draft of the full report. The report will undergo a procedure of validation and approval by policy-makers to enable its most efficient use in policy decisions. A Summary for Policy-Makers (SPM) will be presented to government representatives from the entire Mediterranean, discussed with them and modified where needed.

The detailed procedure presented below may be modified or adjusted following  MedECC Steering Committee decisions. 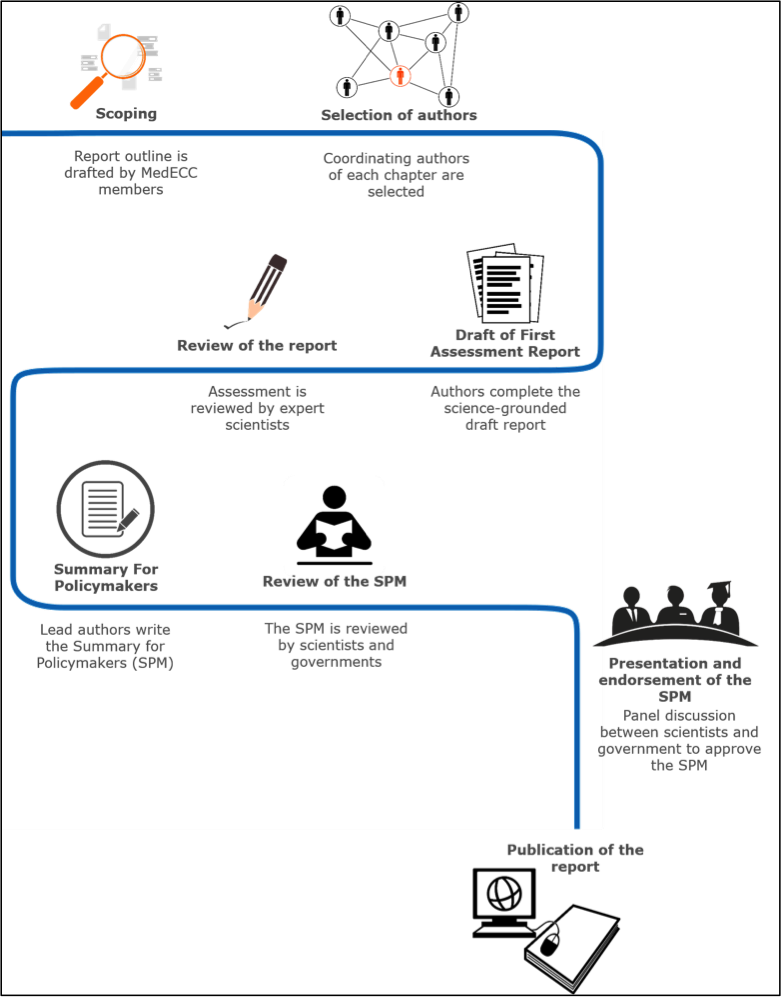 Fig. The first MedECC report production and validation procedure (inspired by the procedure of the Intergovernmental Panel on Climate Change)

The main activity of MedECC is to collect and synthesize the existing scientific knowledge about the current state and risks of climate and environmental changes in the Mediterranean region and to render it available to policy-makers. The work on the first MedECC report started at the end of 2016 and its publication is planned for the end of 2019. The strength of this report will be its independent character, as it is a joint and voluntary effort of the international scientific community.

The report will undergo a procedure of validation by policymakers, to enable its most efficient use in policy decisions. This process will be conducted in close cooperation between MedECC and some international organizations, such as the Union for the Mediterranean Climate Change Experts Group (UfM CCEG) and the UNEP-MAP system. The first UfM working group on Environment and Climate Change held on March 15, 2017, concluded that “UfM Member States welcomed the willingness of the scientists gathered within the MedECC network to contribute to the vulnerability assessment of the Mediterranean regarding climate and environmental impacts on relevant sectors.” MedECC is also supported by the Regional Activity Center of the Mediterranean Action Plan (MAP) of United Nations Environment Programme (UNEP) through its Regional Activity Center, Plan Bleu. The production of MedECC report responds to the flagship initiative for the Objective 4 (“Addressing climate change as a priority issue for the Mediterranean”) of the Mediterranean Strategy for Sustainable Development (MSSD 2016-2025), which recommends “the establishment of a regional science-policy interface mechanism (…) with a view to preparing consolidated regional scientific assessments and guidance on climate change trends, impacts and adaptation and mitigation options”.

The publication of the MedECC assessment report and its Summary for Policy-Makers (SPM) will thus be the result of a collaboration between scientific experts from all across the Mediterranean region and the effective implication of government representatives in the endorsement process of the, thereby acknowledging their awareness of the importance of climate and environmental issues as a governance priority for the region.

The preparation and the validation of the report involves four steps:

1) Preparation and scientific review of the full report

The lead and contributing authors will together produce the first version of the report. The entire assessment shall be supported by scientific references – no additional research will be undertaken as MedECC activity. The report will be primarily based on peer-reviewed literature (English and non-English written papers), but selected non-peer review literature will also be considered (such as the institutional reports, national statistics…) in which case the MedECC experts will have carefully checked the quality of the included references and can justify their inclusion. The different chapters of the reports will be timely collected, merged and harmonized to produce the first draft report.

It will be then sent to a group of expert reviewers (public call for volunteer participation as a reviewer). The role of the reviewers will be to comment on the accuracy and completeness of the scientific, technical or socio-economic contents and the overall scientific, technical or social economic balance of the draft report. Coordinating lead authors of each main chapter will collect the feedbacks on the report from the reviewers and check for the completeness of the review (i.e., that the review is comprehensive and that all chapters have been given appropriate consideration). While government representatives will not be formally invited to review the complete report, the full draft report will be available to them online, so that they will have the possibility to comment on it. The comments from expert reviewers and government representatives will be forwarded to the lead authors of the different chapters to proceed to the revision.

2) Preparation of the Summary for Policy-Makers (SPM)

The SPM (of about 20 pages) will be produced by lead authors after an initial three-day workshop. This workshop will help to define the main messages, the precise outline, and the illustrations of the SPM. It shall be an intelligible and non-prescriptive document that is consistent with the factual material and findings contained in the full scientific assessment. The lead authors will then write the first draft of the SPM, which will be firstly internally reviewed. The second draft will be prepared accordingly. This second draft will then be transmitted to government representatives (UfM CCEG, the UNEP/MAP and other decision-makers) to be reviewed. As for the expert review, the review coordinator will check the comments from the government representatives and the summary will be appropriately corrected. This corrected version will then be presented at a meeting with government representatives to be endorsed.

3) Large conference with government representatives to present, discuss and endorse the SPM of the first MedECC assessment of climate and environmental change in the Mediterranean and risks for human well-being

It the necessary funding will be available, a three-day meeting will be organized to present, discuss and endorse the SPM of the first MedECC assessment. About 100 participants will be present, including 80 policy-makers and other decision-makers together with the members of the MedECC Steering Committee and the coordinating lead authors of the main chapters of the report. Special attention will be paid to maintain the balance between the representatives of the various Mediterranean countries (Northern, Southern and Eastern countries). During this event, the coordinating authors of each of the main chapters will present in details the SPM to the government representatives. The government representatives will present their comments on the SPM and discussions will be open to reach a consensus. The final SPM will be made public in a press conference.

4) Publication and distribution of the report and of the SPM

After approval by governments, the report and its SPM will be made available on the MedECC website and a printed version will be sent to all Mediterranean governments. The report will be in English and the SPM will be in three languages (English, French and Arabic).

The Mediterranean makes you dream by the beauty of its landscapes, its climate, its historical and cultural heritage. It is a unique place due to

The Health and Climate Change Country Profiles, developed in collaboration with national governments, are part of WHO’s monitoring of health sector response to climate change. The

Why does the Mediterranean region need science diplomacy?

According to a new study, coral populations of the Mediterranean —essential for the functioning of the coral reefs, one of the most emblematic habitats in

A new study quantifies and assesses the possible causes of declining groundwater resources in the Euro-Mediterranean region form 2003 to 2020. The results put the