Governance and functioning of MedECC

Summary : MedECC builds on a community of scientific experts willing to provide their expertise on a voluntary basis. Their objective is to support decision-making in the Mediterranean with accurate and accessible information on current and future impacts of climate and environmental changes. In November 2019, this network counted more than 600 scientists from 35 countries. The core of the governance of MedECC is the Steering Committee (20 members). MedECC is coordinated by Joel Guiot (CNRS, France) and Wolfgang Cramer (CNRS, France). The connection with the socio-economic world is established mainly through collaboration with Plan Bleu – Regional Activity Center of the United Nations Environment Programme (UNEP) Mediterranean Action Plan (MAP) and the Union for the Mediterranean.

The network of Mediterranean Experts on Climate and Environmental Change (MedECC) was launched during a side event organized at the Conference ‘Our Common Future under Climate Change’ (CFCC) in Paris, (France) in July 2015. MedECC is an open and independent network of scientists working towards a regional science-policy interface for climatic and other environmental changes across the Mediterranean.

MedECC’s work is fully oriented towards the highest possible scientific standards, with full participation of experts from all involved regions and required scientific disciplines. It is inspired by the Intergovernmental Panel on Climate Change (IPCC), which aims atproviding the world with an objective,scientific view ofclimate changeand itspoliticalandeconomicimpacts. The two coordinators of MedECC are Lead Authors of the Special Report of IPCC on 1.5°C warming, published in October 2018. Several authors and coordinators of MedECC are authors for the next 6th IPCC report. A cross-chapter on Mediterranean Basin of the 6thIPCC report will be coordinated by one of the MedECC coordinators and will thus build on MedECC’s efforts and results.

Appropriate interactions between MedECC and decision-makers and stakeholders are developed, through a relevant science-policy interface. Following the adoption of the 2017-2022 work program of the UfM CCEG, UfM Member States agreed to rely on MedECC for the assessment of climate and environmental impacts on the Mediterranean. It has been decided that given the cross-sectoral nature of the MedECC and its strong environmental dimension, any possible UfM contribution to the MedECC activities will be elaborated in an inclusive way, by involving jointly the Environment and Climate Change representatives of the UfM Member States and in coordination with all relevant UfM structures.

The synergies with other policy dialogue structures are built, especially with the MAP-Barcelona Convention system via the MCSD and Plan Bleu Focal Points. The MAP Programme of Work and Budget for 2018-2019 (adopted at COP 20 in Tirana in December 2017) include specific activities that strengthen interface between science and policy-making through enhanced cooperation with global and regional scientific institutions and knowledge sharing platforms, including MedECC.

The Secretariat of the Union for the Mediterranean signed an agreement with Plan Bleu Regional Activity Center (UNEP/MAP) to jointly support MedECC. 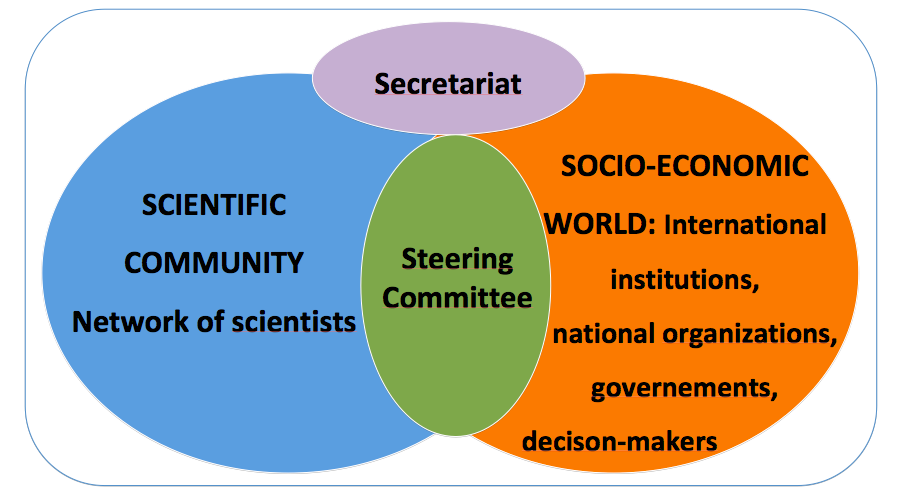 MedECC builds on a community of scientific experts willing to provide their expertise on a voluntary basis. Their objective is to support decision-making in the Mediterranean with accurate and accessible information on current and future impacts of climate and environmental changes. The scientific information will be communicated to decision-makers in the form of regular and comprehensive reports (including summaries approved by government representatives), reports on demand on specific issues, as well as training activities. In November 2019, MedECC scientific network counted more than 600 scientists from 35 countries. All scientists are present in personal capacity – they do not represent an institution or country.

The core of the governance of MedECC is the Steering Committee (SC). It is currently composed of 20 members from 11 countries, including 16 scientists (representing environmental sciences, as well as political sciences and economics) and 4 representatives of policy-making bodies : the Union for the Mediterranean (UfM), the Advisory Council for the Sustainable Development of the Government of Catalonia (CADS), the UN Environment/MAP (United Nations Environment Programme/Mediterranean Action Plan, Plan Bleu (UN Environment/MAP Regional Activity Center). Members of the MedECC Steering Committee decide on the functioning of MedECC. Its role is also to strengthen the science-policy dialogue, for example through networking (participation in events, conferences or outreach activities) and to contribute to improving the visibility and credibility of the Mediterranean science-policy interface. It will also review the evolution of membership in the network.

MedECC is currently coordinated by Joel Guiot (CNRS, France) and Wolfgang Cramer (CNRS, France), who ensure MedECC’s daily management. The secretariat of MedECC has been established in May 2018. It is funded by the Swedish International Development Cooperation Agency (SIDA) through Union for the Mediterranean and is hosted by Plan Bleu in Marseille, France.

The efficient dialogue between scientists and decision-makers is a key condition for the success of MedECC. The publication of the MedECC assessment report and its Summary For Policymakers will be the result of a productive collaboration between scientific experts and the effective implication of government representatives in the endorsement process of the summary. The connection with the socio-economic world is established mainly through a close collaboration with Plan Bleu – Regional Activity Center of the United Nations Environment Programme (UNEP) Mediterranean Action Plan (MAP) and the Union for the Mediterranean. Several other institutions support MedECC (go to the list).