Home » Scientific news » The greening of the earth is reaching its limit, CREAF

The greening of the earth is reaching its limit, CREAF

Original article published on CREAF (The Centre for Research on Ecology and Forestry Applications, Barcelona, Spain) blog by Albert Naya i Díaz
Go to the article

A new study led by Josep Peñuelas and published in Nature Ecology and Evolutionreveals that CO2 abundance in the atmosphere no longer has a powerful fertilizing effect on vegetation. The greening that has been observed in recent years is slowing and this will cause CO2 levels in the atmosphere to rise, thus increasing temperatures and leading to increasingly severe changes in climate. 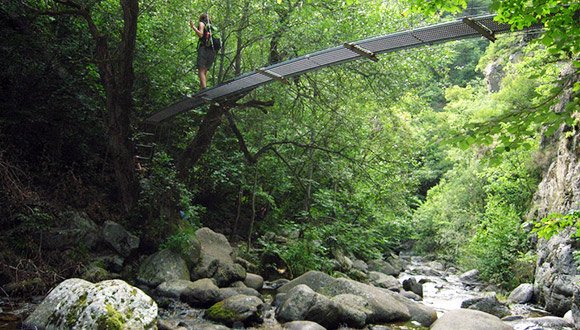 Terrestrial ecosystems are showing signs of saturation and their capacity for atmospheric carbon capture is weakening. Global warming is also making these ecosystems less productive, especially during heat waves. A study published in the journal Nature Ecology & Evolution led by the CSIC researcher at CREAF Josep Peñuelas concludes that lower ecosystem productivity and a deceleration in carbon capture will lead to a change in scenery.

From a global scenario dominated by the positive effects of carbon and nitrogen fertilization, we will move to another characterized by ecosystem saturation and greater climate change impacts,” says Dr. Peñuelas.

Terrestrial ecosystems annually remove about one-third of the carbon dioxide emissions generated by fossil fuel use, industry, and land-use change. “If human emissions continue to increase and ecosystems are becoming less efficient in removing carbon, we will move from a scenario where excess CO2 is no longer acting as a fertilizer favoring vegetation growth into a period where the greater amount of atmospheric carbon accelerates global warming, “explains Peñuelas. In fact, “not only will ecosystems be able to sequester less and less carbon, but carbon will remain less time in plants and soils and will be returned to the atmosphere sooner“, adds Jordi Sardans, study coauthor and researcher at CREAF.

Through carbon capture, ecosystems act as a buffer slowing the effects of increased CO2 and reduce the impacts of climate change. But the current lack of other nutrients such as potassium, and more crucially, phosphorus, as well as changes in the climate, are becoming major obstacles to plant growth.  “In the future, it will be nutrient availability which sets the capacity of vegetation to take carbon out of the atmosphere.

We need a better understanding of the phosphorus cycle functions and what factors regulate its circulation in ecosystems,” says Marcos Fernández Martínez, study coauthor and researcher at CREAF.

“The severity of climatic phenomena such as droughts are also especially negative for plant productivity, above all if they occur in periods of vegetation growth,” says  Jofre Carnicer, study author and CREAF researcher.  In fact, a global temperature increase of 2° C would not cause much of an increase in the frequency of heat waves, but an increase of 3° C would result in summers as warm as in 2003 every three or four years, affecting carbon capture in forests much more that has occurred to date.

During 2015 there were large fires in Southeast Asia, coral bleaching in Australia, droughts in Africa, and floods in South America associated with El Niño; all of this was fueled by record temperatures and serve as examples of this transition to a warmer world. Therefore, “we need a better understanding of the impacts of climate change and what mitigation measures should be applied to meet the COP21agreements on rising global temperatures,” concludes the lead author of the study, Josep Peñuelas.