The issues of water, food and energy supply and demand in the Mediterranean are closely interconnected. The on-going and future changes in these sectors result directly from climate and environmental change (e.g. increasing temperature and decreasing precipitation), but also changes in human activities (modification of production and consumption patterns). In general, the population growth (especially in southern Mediterranean), the rapid urbanization and the population concentration in coastal areas (UNEP/MAP 2013) lead to an increasing demand for water, food and energy.

Countries on the Southern and Eastern rim of Mediterranean with semi-arid climate are more subject to water shortage and high inter-annual variability of their water resources (Fig. 1). In some regions, especially in Northern Africa countries (e.g. Schilling et al. 2012), decrease in precipitation together with a higher temperature result in the increased evapotranspiration, leading to decreased water availability (Jiménez Cisneros et al. 2014). According to existing projections, the Mediterranean population classified as ‘water-poor’, (i.e. below 1 000 m3 per resident per year) is forecast to increase from 180 million people today to over 250 million within 20 years (UNEP/MAP 2013). 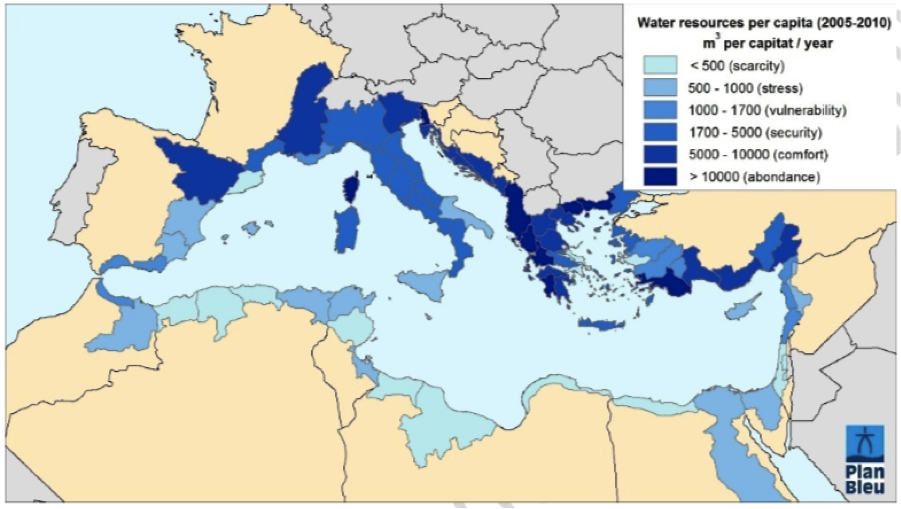 Fig. 1. Annual natural renewable water resources per capita in the Main Mediterranean watersheds, expressed as levels of shortage for human use (Plan Bleu 2014).

Floods, which are expected to be more frequent, diminish water availability, as they may provoke damage to water supply systems, insufficient drinking-water supplies,and disruption of transport systems (Michelozzi and de’ Donato 2016).

The main source of fresh water in North Africa and the Middle East are shared aquifers. This resource is threatened, as in the North-Western Sahara aquifer system has a renewal rate of only 40% of the withdrawals (Gonçalvès et al. 2013). Intensive exploitation of groundwater resources led to critical drops of groundwater levels (Custodio et al. 2016, Moustadraf et al. 2008). Not only the quantity of groundwater decreases, but also its quality deteriorates because of overexploitation, pollution, increasing urbanization, and salt water intrusion caused by sea level rise (Leduc et al. 2017).

Some arid regions are depended to a large extent on the water resources provided by the snowmelt in mountain ranges. For these snow-dominated catchments (for example in the Atlas Mountains in Morocco) climate change results in a decrease in spring runoff associated with a reduced snow cover (Marchane et al. 2017), provoking the decrease in available water.

Ongoing climate, environmental and socio-economic changes pose threats for food security in this region. These pressures are not homogeneous across the region and sectors of production (Paciello 2015). Factors affecting agriculture and livestock production around the Mediterranean basin are soil degradation, fires, changes in plant species composition and land erosion (Kovats et al. 2014, Plan Bleu 2003). Moreover, the area available for agriculture reduces due sea-level rise and land subsidence (Link et al. 2012). Food safety is also threatened by mycotoxins formed on plant products in the field or during storage and pests, which and are linked to climate conditions (Miraglia et al. 2009).

The current consumption patterns imply high ecological, carbon, and water footprints (Lacirignola et al. 2014). Within a period of 50 years, the population in the North Africa and Middle East region has increased by a factor of 3.5, while dietary habits have become more westernized (including more meat). Livestock production, mainly located in the semi-arid and arid lands of the Mediterranean South, has shifted from extensive modes to systems heavily dependent on feed grain, increasing poverty and rural exodus and rendering production sensitive to climatic shifts. These regions become more dependent on imported food (INRA/Pluriagri 2015).

Energy is central for mitigating climate change. Most of the Mediterranean greenhouse gas (GHG) emissions are CO2 connected with energy use. The energy demand around the Mediterranean grows at a very high pace, especially in the Southern Mediterranean, due to increasing demographics and new electrical appliances (MedENER, OME, ADEME 2016). The growing energy demand is further accelerated by the additional demand necessary to lessen the impacts of climate change. Although the demand in heating energy decreases in winter, the cooling energy demand increases in summer. Energy sector is closely linked to industry, food production, including irrigated agriculture (Daccache et al. 2014), and water production, including its abstraction and desalinization (Siddiqi and Anadon 2011, Mathioulakis et al. 2007). Tourism and urban areas are also important consumers of energy (Plan Bleu 2008).

The availability of energy from conventional sources is limited and its environmental impacts are important. There is a big potential for renewable energy sources, especially in the South Mediterranean region (MedENER, OME, ADEME 2016). Conditions for renewable energy production, such as solar and wind energy, may be influenced by climate change (Leckebusch and Ulbrich 2004, Koletsis et al. 2016). A low water supply induced by climate change reduces energy production from hydroelectric plants, as well as from thermal power stations, which require water for cooling and for driving the turbines (Giannakopoulos et al. 2009).