The impacts of climate and environmental changes in the Mediterranean may be analyzed in the context of Sustainable Development Goals (SDGs, Fig.1), which are targets defined by the United Nations and accepted by all the countries in the perspective of an equilibrated development. Sustainable development is development that meets the needs of the present without compromising the ability of future generations to meet their own needs (WCED 1987). The SDGs set the framework for securing viable and lasting development and decent livelihoods for all (UNEP/MAP 2015). Socio-economic issues, together with ongoing climate and environmental changes create new challenges for a sustainable future of the Mediterranean basin.

The Mediterranean region is marked by important discrepancies between countries. In general Northern Mediterranean countries perform better than Southern Mediterranean and Middle East countries (with some exceptions both ways) in regard to: economic condition, educational level and access to information, government effectiveness and social networks (Grasso and Feola 2012). These inequalities are exacerbated by a rapid demographic grow in the Southern and Eastern Mediterranean (World Bank 2018), as well as on-going political conflicts.

Climate and environmental changes influence social and economic development. A connection between economic development and climate change goes both ways. Human-generated greenhouse gases depend on the level of economic activity. However, economic growth itself is likely to be affected by climate change. Climate change impacts productivity, as well as production and consumption patterns. It affects markets and economy through its impact on agriculture, sea-level rise, health, energy demand and supply, tourism, forestry, fisheries or extreme events (Aaheim and Wey 2009, Ciscar et al. 2011). Developing countries are particularly affected (Eboli et al. 2010).

Climate and environmental changes have both direct and indirect effects on human health. Direct effects include higher temperatures, increased UV irradiation and localized storms and floods. The Mediterranean region becomes warmer with a significant increase in the frequency, intensity and duration of heat waves (Kuglitsch et al. 2010). This is amplified in the Mediterranean cities by the urban heat island effect (Baccini et al. 2011). Heat waves may cause cardiorespiratory deaths (McMichael et al. 2006). Furthermore, excessive exposure of the skin to the sun (ultraviolet radiation) causes skin cancer (Lucas et al. 2015).

Indirect health effects are related to the deterioration of air, soil and water quality (Cecchi et al. 2010). The concentration of gases and particles in the air increases because of desertification and wildfires resulting from climate change (D’Amato et al. 2015), as well as due to human activity, especially in large cities. Air quality also impacts climate change, because many air pollutants are greenhouse gases (Ayres et al. 2009). Climate change leads to the modification in a geographic distribution range of some plant species, extension of the pollen season, and increased production of pollen and pollen allergens (D’Amato et al. 2007).

Saltwater intrusion into groundwater caused by sea level rise (Leduc et al. 2017), may deprive some population of drinking water, which may have serious health consequences.

Climate and environmental changes, as well as societal, economic and political issues (e.g. conflicts) threaten human security. The main hazards in Mediterranean coastal zones are erosion and flooding (Satta et al. 2016). Rising sea-level, storm-surge, flooding, and local land subsidence affect harbors, port cities and other coastal infrastructures, as well as wetlands and beaches around the Mediterranean (Fig. 2) (Sánchez-Arcilla et al. 2011). In the Mediterranean region nearly 40% of the coastline is built up (AllEnvi 2016). The infrastructures are often very close to mean sea level, because of limited storm surges and small tidal range (Becker et al. 2012). Adaptive capacity of Southern and Eastern regions of Mediterranean is generally smaller than of the one of the Northern regions (because of social and economic conditions) (Satta et al. 2015). Risks of floods increase due to climate change, but also due to non-climatic factors such as increasingly sealed surfaces in urban areas and ill-conceived storm water management systems (Pistocchi et al. 2015). 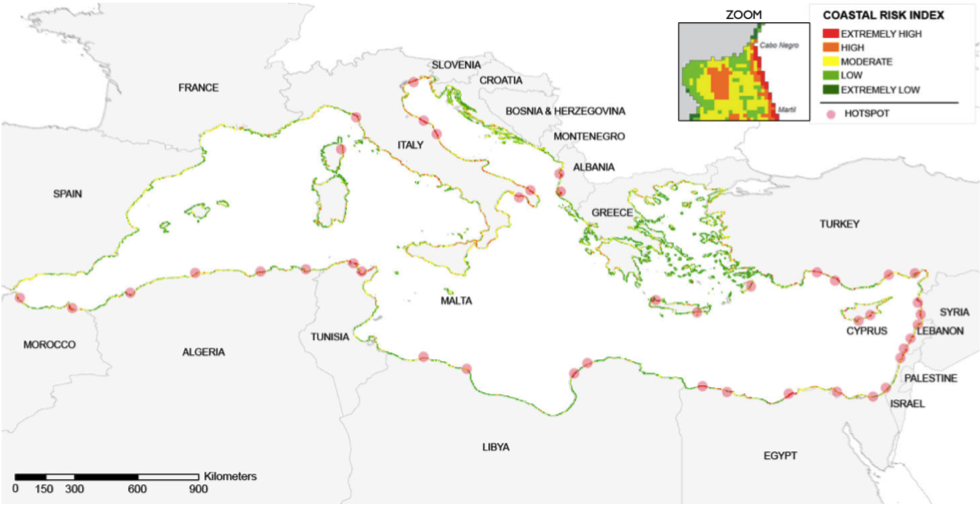 Another threat to human security associated with climate change is the higher frequency of fires, especially at the periphery of the inhabited areas (Ruffault et al. 2016).

Human security around the Mediterranean is much dependent on sociopolitical situation. In general, climate change tends to exacerbate conflicts. The link between severe droughts influencing farming sector and conflicts and migrations in Syria is discussed (Brzoska and Fröhlich 2016, Gleick 2014, Kelley et al. 2015). Both environmental and socio-political changes lead to forced human migrations toward regions less exposed to risks (Renaud et al 2011).