France was a traditionally agricultural country until the first half of the 20th century. Today, it is the first European cereal producer, with cereal crops accounting for 40% of the agricultural surface area used, and is also a major country for livestock breeding with 25% of the European cattle livestock. This major socioecological transition, with rapid intensification and specialisation in an open global market, has been accompanied by deep environmental changes. To explore the changes in agricultural GHG emissions over the long term (1852–2014), we analysed the emission factors of N2O from field experiments covering major land uses, in a gradient of fertilisation and within a range of temperature and rainfall, and used CH4 emission coefficients for livestock categories, in terms of enteric and manure management, considering the historical changes in animal excretion rates. We also estimated indirect CO2 emissions, rarely accounted for in agricultural emissions, using coefficients found in the literature for the dominant energy consumption items (fertiliser production, field work and machinery, and feed import). From GHG emissions of ~30,000 ktons CO2  Eq yr−1 in 1852, reaching 54,000 ktons CO2  Eq yr−1 in 1955, emissions more than doubled during the ‘Glorious thirties’ (1950–1980), and peaked around 120,000 ktons CO2  Eq yr−1 in the early 2000s. For the 2010–2014 period, French agriculture GHG emissions stabilised at ~114,000 ktons CO2  Eq yr−1, distributed into 49% methane (CH4), 22% carbon dioxide (CO2) and 29% nitrous oxide (N2O). A regional approach through 33 regions in France shows a diversity of agriculture reflecting the hydro-ecoregion distribution and the agricultural specialisation of local areas. Exploring contrasting scenarios at the 2040 horizon suggests that only deep changes in the structure of the agro-food system would double the reduction of GHG emissions by the agricultural sector. 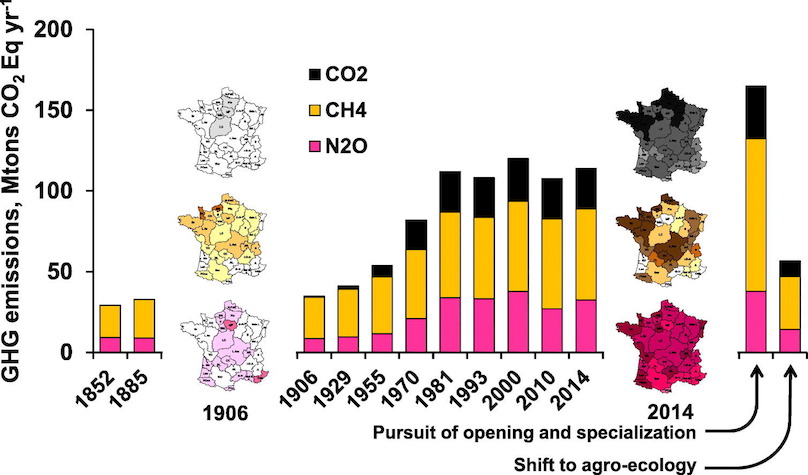 Benefits of the Paris Agreement to ocean life, economies, and people (article)