The main conclusion of this articles is that at or above 2°C of warming, climate change will generate Mediterranean land ecosystem changes that are unmatched in the Holocene. Deserts would expand in southern Spain and Portugal, northern parts of Morocco, Algeria and Tunisia and other regions including Sicily, southern Turkey and parts of Syria. 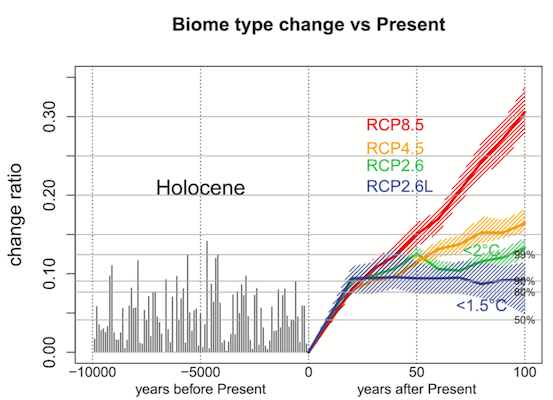 Fig. Proportion of grid cells with a biome change relative to the preindustrial period for the Mediterranean area (10°W to 45°E, 28°N to 48°N). The horizontal axis represents the time scale, in years before the present (20th century) for the past (negative numbers) and in years after the present (CE 2000–2010) for the future (positive numbers). Holocene biomes (in black) are based on reconstructions from pollen data (4). Colored lines are given by the BIOME4 model as applied to the RCP projections (see text). Horizontal lines represent the 50th, 80th, 90th, and 99th percentiles of the Holocene values. The colored areas illustrate the interquartile interval provided by the intermodel variability.

Abstract
The United Nations Framework Convention on Climate Change Paris Agreement of December 2015 aims to maintain the global average warming well below 2°C above the preindustrial level. In the Mediterranean basin, recent pollen-based reconstructions of climate and ecosystem variability over the past 10,000 years provide insights regarding the implications of warming thresholds for biodiversity and land-use potential. We compare scenarios of climate-driven future change in land ecosystems with reconstructed ecosystem dynamics during the past 10,000 years. Only a 1.5°C warming scenario permits ecosystems to remain within the Holocene variability. At or above 2°C of warming, climatic change will generate Mediterranean land ecosystem changes that are unmatched in the Holocene, a period characterized by recurring precipitation deficits rather than temperature anomalies.

This article has been cited a great number of times (about 200) in the press in many countries, among others: