France just had one of its driest autumns in nearly 60 years, especially in Mediterranean areas

The anticyclonic conditions prevailed throughout the autumn* over western Europe. Several highly active disturbed systems have circulated most of the time on the sidelines of France, depriving the country of significant rainfall over a large southern half.

Precipitation has been negative over most of the country. It was close to normal for Normandy in the Hauts-de-France, slightly in surplus from the Ile-de-France to Champagne-Ardenne and Lorraine. The deficit, often over 40%, locally reaching 80% has been recorded in Languedoc-Roussillon and Provence-Alpes-Côte d’Azur. The average rainfall over the country and the season shows the deficit of 30%, placing this autumn among the driest over the period 1959-2017. In the Mediterranean regions, the autumn of 2017 was marked by a near absence of rain after an exceptionally dry summer in these regions. This persistent deficit has contributed to a remarkable dryness of the surface soils around the Mediterranean rim and in Corsica, which persists since the spring.

The sunshine was contrasted *** : generous in the southern half, particularly in New Aquitaine and in the Mediterranean regions. It has, on the other hand, been slightly deficient in the Northwest, where cloudy periods have been more frequent, though often not very active.

Strinking facts of the fall of 2017

Very dry shallow soils over a large part of the country

Rainfall was heavily deficient in the Mediterranean regions where it generally rained less than 10 days in three months. Over the whole autumn, the rainfall deficit, which often reached 60% over the south-east part of France and Corsica, locally exceeded 80% over the Gard and the Provence-Alpes-Côte d’Azur region. This autumn should thus rank among the three driest in the Gard and the PACA region. In addition, the departments of Vendée and Deux-Sèvres are also concerned by a persistent deficit that should exceed 50% over the season.
Since the beginning of autumn, the dryness of shallow soils has increased over a large part of the country. Only regions near the northern borders have become slightly humidified. On the South-East, the dryness of the shallow soils, which began in the spring, continues to reach record values ​​in Corsica and PACA region. 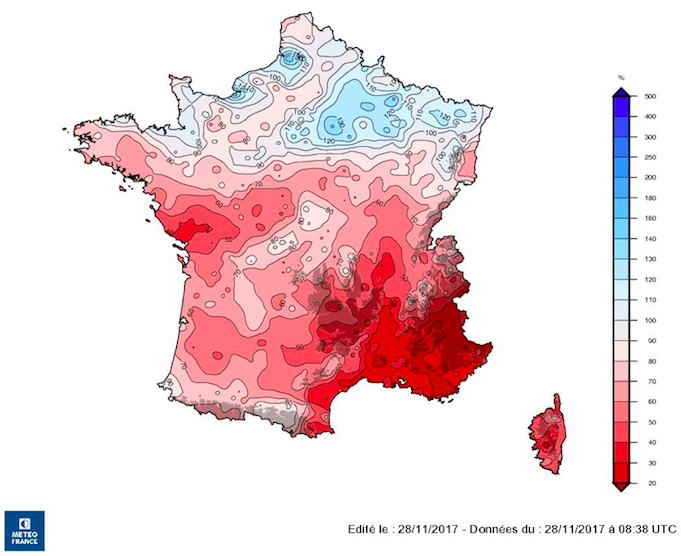 Compared to the 1981-2010 seasonal reference average of cumulative precipitations