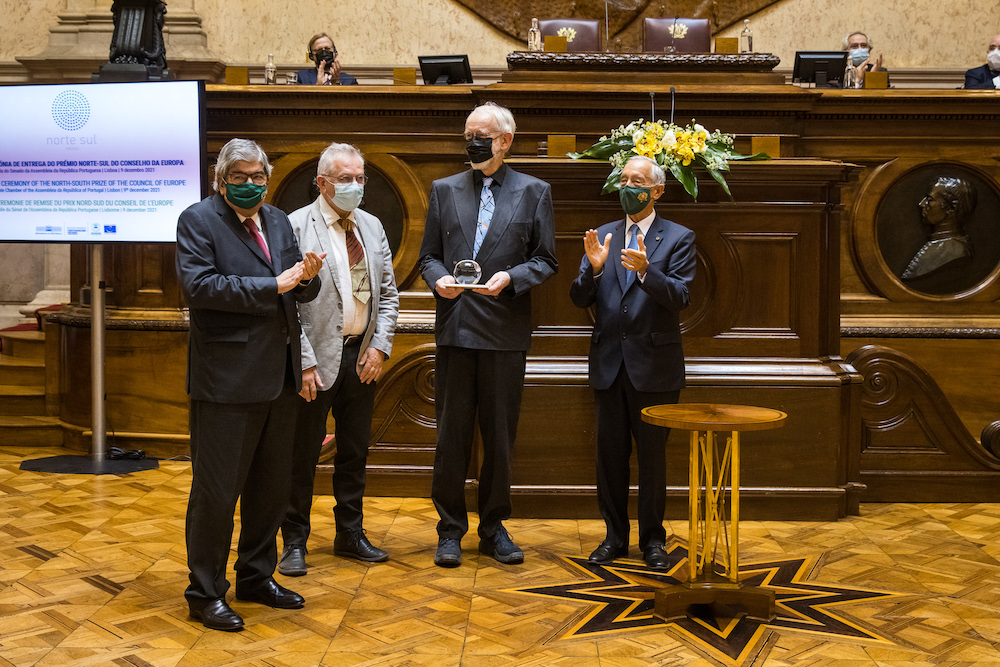 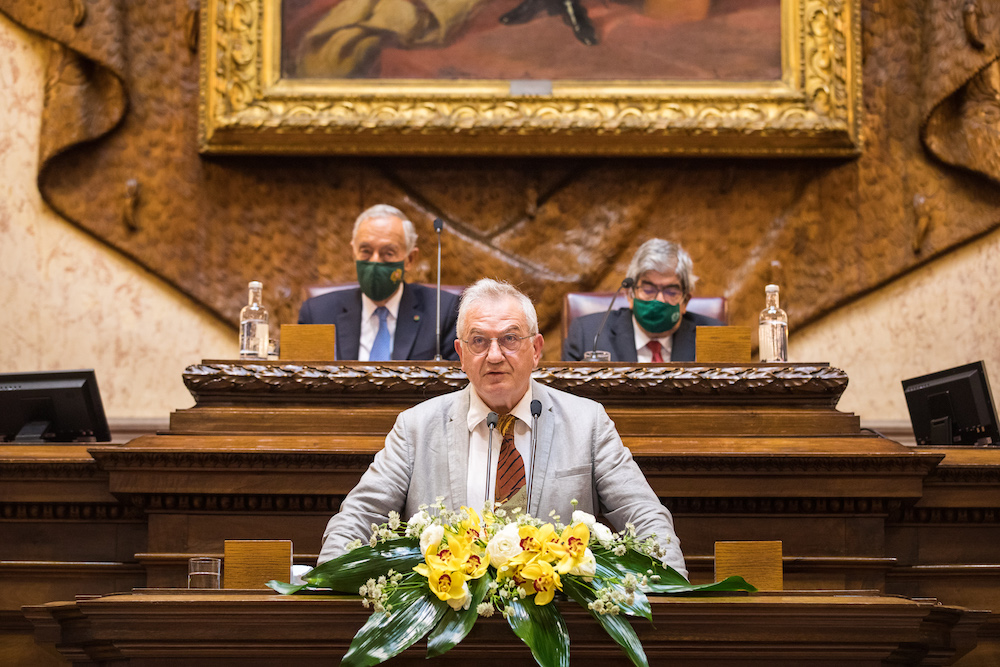 Wolfgang Cramer and I are pleased to be here in Lisbon today, in order to receive the North-South Prize 2020 from the Council of Europe. We are here on behalf of a large community of scientists from many institutions around the Mediterranean Basin. We know all our colleagues are extremely grateful for this honour, and we want to express our deep gratitude to the Council of Europe, and its Jury, for this recognition.

Before we mention a few key findings of our assessment of risks of environmental change in the region, let me say a few words about our network.

Since the first establishment of MedECC, the Mediterranean Experts on Climate and environmental in 2015, approximately 700 experts have expressed interest to be informed about our initiative that aims to inform policymakers on risks associated with climate and environmental change. Our international Steering Committee selected 192 of them for dedicated author roles, covering all relevant scientific disciplines, but also ensuring good participation from Southern and Eastern Mediterranean countries and a good gender balance.

A particular motivation for this work came from several intergovernmental institutions who provided significant support in terms of logistics, but also by linking our activity to virtually all governments of the region. These institutions are the Union for the Mediterranean, the United Nations Environment Programme’s Mediterranean Action Plan, and the Barcelona Convention’s Plan Bleu. While none of these institutions took any influence on our actual scientific conclusions, their role was important to ensure that we actually addressed questions of public and general concern. We would like to thank all three of them for their support, and we know that they continue to ensure that MedECC can develop its mission.

The Mediterranean Basin is often referred to as a hotspot for climate change and biodiversity, because of interaction of numerous drivers: climate change, pollution, unsustainable use of land and sea and the invasion of non-native species.

While the global temperature is now 1.1°C warmer than the pre-industrial level (1850-1900), for the Basin, it has now reached +1.5°C. This is less surprising than it appears to be, since all of the world’s land surfaces have warmed more than the atmosphere above the oceans. The Mediterranean Sea, being semi-enclosed and relatively shallow, is warming faster than the global ocean.

Warming rates are highest in summer, particularly for afternoon temperatures. This will increase the intensity and frequency of heat waves. Cities will experience heat peaks that will be further amplified by several degrees by mineral surfaces, with particularly significant health risks for children, elderly and poor people. Their health risks are further amplified by air pollution, which is also exacerbated during hot episodes.

Precipitation is undergoing a paradoxical evolution with an accentuation of drought during the summer months and an increase in heavy rains and thus the risk of flooding in the winter months. Only a relatively low average decrease of rain has been projected by climate models, but with enhanced evaporation this may cause severe water shortages for several hundreds of million people. In addition, water demand is expected to increase by 20% to 70% by 2100 due to demographic changes, tourism and irrigation needs for agriculture. This shortage will be most significant in the southern and eastern Mediterranean where the climate is already arid and where three-quarters of the basin’s population live.

In economic terms, the region depends heavily on tourism, which faces the dual threat of heat waves and environmental degradation on the one hand, and the necessary decarbonisation of transport on the other. The current COVID crisis has accentuated many of these negative developments. Based on our assessment, we find it necessary to call for a paradigm shift regarding economic development which cannot be based on perpetual growth, the assumption of abundant (mostly fossil) energy resources and the production of ever larger amounts of waste. Nutrition, with a revival of the healthy traditional Mediterranean diet is just one example for a possible transition to lifestyles that are more respectful of nature and thus more sustainable. Other such areas are urban development, transport and agriculture. 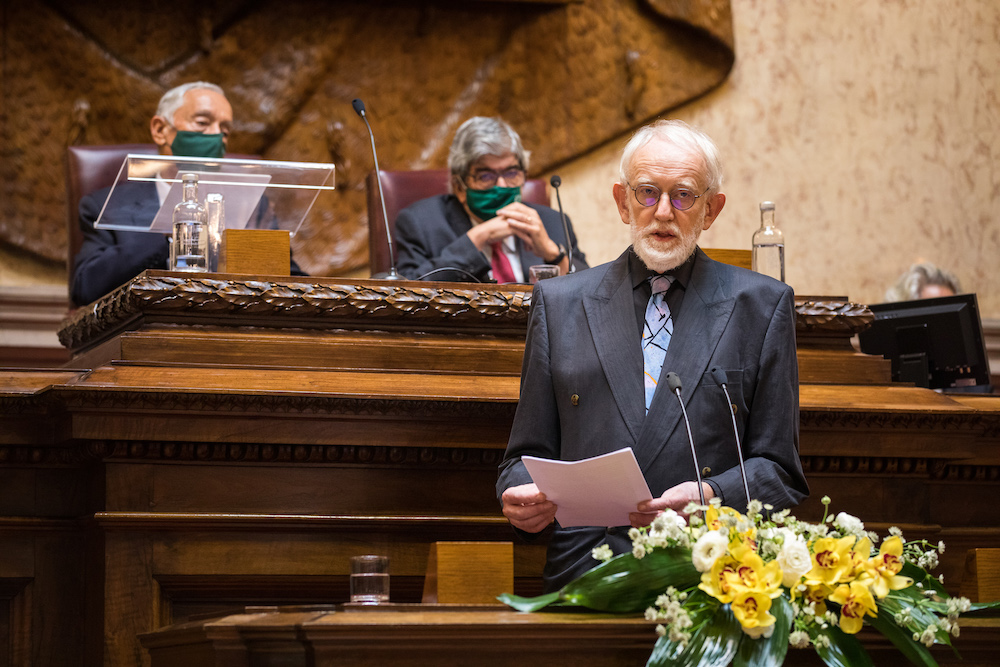 Besides warming, environmental change in the Mediterranean also concerns pollution of the air and the sea, notably from plastics and chemicals. It is also a matter of widespread degradation of ecosystems on land and in the ocean from unsustainable use, including uncontrolled urban development—we do not have time to speak about this today. But we must speak about one threat of particular concern: Sea-level rise, currently reaching 4 mm/year is likely to accelerate further due to the destabilization of ice in Greenland and Antarctica. We know that current levels of climate change imply a possible lock-in of further sea-level rise for centuries, and levels above 10m cannot be ruled out for the year 2300. There is no conceivable protection against this, and the Mediterranean is particularly vulnerable to this, because many human settlements and also coastal ecosystems are very close to mean sea level. Centuries-old cultural heritage will be lost in the near future, including coastal cities such as Venice and its lagoon. Already now, smallholder farming systems in deltas such as the Nile, are flooded more frequently than before, and the water required for irrigation of their land is becoming saltier and can soon no longer be used.

Ecosystems in the Mediterranean region are of a particular diversity, due to the specific environment, but also due to several millennia of co-evolution between human societies and their natural environment. Our report treats this relation in some detail, here I can only say that all ecosystems are at risk from environmental change. This is of concern because of the multiple benefits we draw from ecosystems, but also because, fundamentally, all philosophies and value systems around the Mediterranean consider that nature, and all living beings, have an intrinsic value, irrespective of their use for us. It is thus not an extreme view if we call for the protection of these ecosystems against environmental change.

The Mediterranean is currently a hotspot of social and political instability, with many countries experiencing economic losses and significant suffering of populations. Scientific studies do not support the simplistic view that environmental change could be seen as a primary cause for conflict and even war—however, we now do understand that these changes can act as a “threat multiplier”, potentially aggravating conflict and making people more likely to consider migration. This is one of the topics where our assessments touches on basic human rights issues, and we think that these risks alone provide ample reason for governments to strengthen substantially their efforts to protect people against the impacts of environmental change. In fact, we notice with satisfaction that additional work in this area is being welcomed, and we therefore currently prepare a special report about environmental change, conflict and migration in the Mediterranean region.

In closing, let me stress that the efforts of the MedECC network are not primarily motivated by a particular view on policies for the environment. Rather, we departed from the notion that environmental decision-making (by public bodies, but also private entities) is likely insufficiently informed about the severity of the situation. MedECC was established to fill this information gap and to synthesise already available scientific information into documents that are more accessible to policymakers and the general public.

One thing we noticed quickly was that the available scientific information was strongly biased to specific details about the northern shores of the basin. It is not difficult to recognize that risks in the South and the East are at least as severe as they are in the North, and there clearly are less resources to adapt to change in these regions. While there is some dialogue about this contrast, information was (and partially still remains) insufficient to overcome these disparities. We hope that our report supports a more equitable distribution of resources, focusing on those people and ecosystems that face the greatest need for help.

Supporting adaptation to the unavoidable parts of environmental change is a key task for the rich economies in the region. But they also need to recognize that the drastic reduction of greenhouse gas emissions, of pollution and of unsustainable land and sea use is primarily their responsibility. We believe that our report provides a sobering foundation for this recognition.

Many previous efforts of networking have shown that cooperation between researchers from all countries in a region can be a basis for improved intercultural exchange in a broader sense. Improving on this for MedECC required particular efforts of contact-making and also listening across language barriers and other obstacles. While we cannot claim full success of these efforts, we believe that this type of interaction has been helpful for the understanding of “North-South issues” across a significant part of our community. We see the North-South Prize as an encouragement in precisely this direction. One element in this effort is that, since the beginning of 2021, the network is coordinated by an additional scientist with high reputation from Morocco, Dr Fatima Driouech, a current vice-chair of one of the working groups of the Intergovernmental Panel on Climate Change (IPCC). More steps will be needed to ensure the participation of colleagues from Southern and Eastern countries in the Basin.

Let me end our short overview of the outcomes of the MedECC efforts with an expression of our deeply felt gratitude, first, to all supporters of the MedECC network, but particularly the authors of our report and the members of our Steering Committee. We are supported by a small secretariat, hosted by Plan Bleu in Marseille, and we have the pleasure to see our Lead Science Officer, Dr Katarzyna Marini, here with us today – without her efforts we could not have brought this network together. I hope they forgive me if we do not mention individually the many personalities in our support institutions Union for the Mediterranean, UNEP-MAP and Plan Bleu here – they know how important each of their activities have been for the success of MedECC.

The good news is that this support will continue. Only the day before yesterday, the 22nd Conference of Parties to the Barcelona Convention, in its still ongoing meeting in Antalya, Turkey, endorsed the MedECC Summary for Policy Makers, a comparable step had been taken by the Ministerial Assembly of the Union for the Mediterranean already a while back.

I know that I can convey the immense gratitude of the entire MedECC network to the Council of Europe for being awarded the North-South Prize, as well as our deep appreciation to the highest representatives of the Republic of Portugal to host us here in your Parliament on this day.

We value this support immensely, but we also hope that current environmental policies which, according to currently available evidence, are insufficient to avert major losses to people in the Mediterranean, will be replaced by significantly more ambitious efforts towards achieving sustainable development and decent living conditions for all inhabitants of the region.

Thank you very much, muito obrigado.