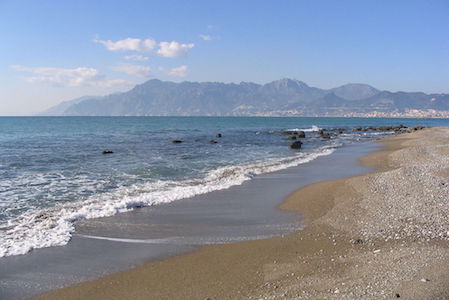 This work features identification of the accelerating global sea level rise between 2005 and 2015 by using the sea level budget approach. It has been believed that we need observations of several decades or more to detect significant global sea level acceleration. This is because the sea level records are disturbed by climate variability and have an inadequate precision. Here we demonstrate that current advances in satellite gravimetry, and marine in situ measurements enable us to detect the acceleration in global sea level rise from 2005 to 2015, 11 years in total. An important factor is that we could precisely quantify different components that contribute to sea level change. Above all, we could substantially reduce the influence of climate variability in terms of the land water storage changes. This work lets us accurately understand the susceptibility of current sea level rise to global warming.

Global mean sea level rise has been accelerating for more than 100 years, and the acceleration in the last two decades seems to further increase. The latest development in geodetic and marine observations enables us to scrutinize and understand the sources of the sea level acceleration in the last decade. For this end, observations from satellite altimetry, gravimetry, and in situ measurements of the ocean between 2005 and 2015 are combined, and their closure is examined. Our results show that the acceleration during the last decade (0.27 ± 0.17 mm/yr2) is about 3 times faster than its value during 1993–2014. The acceleration comes from three factors, that is, 0.04 ± 0.01 mm/yr2 (~15%) by land ice melting, 0.12 ± 0.06 mm/yr2 (~44%) by thermal expansion of the seawater, and 0.11 ± 0.02 mm/yr2(~41%) by declining land water storage. Although these values in 11 years may suffer from natural variabilities, they shed light on the underlying mechanisms of sea level acceleration and reflect its susceptibility to the global warming. 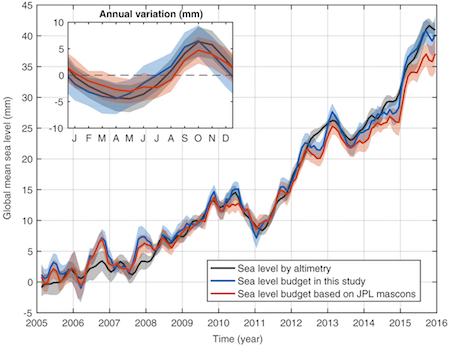 Sea level budget in this study and based on JPL mascons. The annual variations are removed and plotted in the inset. The interannual time series are smoothed by a 3 month sliding window. The sea level budget curves are based on the GRACE (land water and ice) and Argo (thermosteric) observations. Uncertainties in the interannual/annual variations are calculated by the dispersion among different data sets/years.